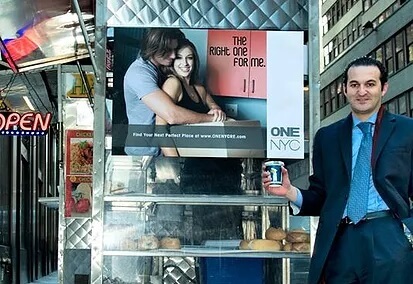 A new brokerage devoted to Manhattan rentals, dubbed ONE NYC RE, launched on Dec. 1 and will be going on a marketing blitz early next year.

The firm is a division of United Equity Investments, a five-year-old real estate company that owns over 1 million square feet of commercial and residential space in New York City. ONE NYC RE already boasts 20 agents, 14 of whom hail from another brokerage, Manhattan Connections.

“Since we went live, we have been on fire,” said Michael Wahba, co-founder of the new firm and UEI. “Our main business was slow, and we wanted to create a cash flow business that we know.”

The company has spent $100,000 on advertising, which will include ads on 480 coffee carts across Manhattan that will be rolled out next month. Print ads will appear in major publications like the New York Times in February.

Mr. Wahba said he is using his relationships with developers—he has established close ties with via UEI—to get listings, and the brokerage is currently working on getting exclusives for its agents. He expects to grow his brokerage to 100 agents in the next 18 months.

ONE NYC RE’s arrival comes at a time when others have shuttered or consolidated this past year. Recently, brokerage CORE acquired boutique firm Garr & Co., and Century 21 bought a small Queens rental firm MQ Realty.

“As far as timing, I give anyone credit for starting a new business, especially in this economy, but running a brokerage firm is an expensive endeavor,” said Gary Malin, president of Citi Habitats, the city’s largest rental brokerage. Noting that he is not familiar with the new firm, Mr. Malin said, “In order to attract agents you must provide an attractive platform for them to excel as well as massive training as the business is very competitive. So the success will likely depend on available funding.”

The new brokerage plans to set itself apart by providing high-touch customer service even after a client rents. It has given renters Apple iPods and checked in with new renters after they have moved into their apartments just to see how they are doing.

“We want to build customers for life,” said Mr. Wahba, adding that ONE NYC RE will be establishing a headquarters office at 1145 Broadway on East 27th Street, in a vacant building that UEI owns. So far, the brokerage has a sales office at 295 Madison Ave.

Mr. Wahba has more than a decade of real estate experience after first starting out as a retail broker. He went on to lead acquisitions for real estate firm Hirsch Wolf & Co., and then did the same for Bonjour Capital, the property investment arm of Bonjour Jeans.

CrainsNewYork.com’s most popular articles of 2009

Citigroup loses $7.6B in 4Q as it repays TARP